Why I love Robert Downey, Jr.

It's been a while since I did a Why I love feature, but it seemed fitting with all the exposure Robert Downey, Jr.'s had lately.  I admit I haven't seen even close to all of his work like some other actors, but in all the movies I have seen he's the best part of the movie.  He's honed his wise-ass, articulate kid act into a smart-aleck knowing adult bad-ass.

Soapdish was the first film of his that I always remembered it was him.  He plays a TV soap opera assistant producer in love with one of the stars who won't really give him the time of day.  He's trying to take over the show from Whoopi Goldberg and move his love interest into the lead, forcing Sally Fields' "America's Sweetheart" into the dumps.  Lots of shenanigans take place that he manipulates rather than causes, and when the whole thing comes to a head, he ends up on the losing side of course. When he realizes the beautiful woman he secretly loves is actually a man, his discreet gagging always kills me.  He's funny and smarmy and fast-talking enough to keep him out of trouble.

Another 80s movie that I love to watch him in is Chances Are.  He plays the reincarnated husband of much-older Cybill Shepherd.  He arrives on her doorstep as her daughter's new boyfriend, but they soon figure out he has all the memories of Shepherd's deceased husband and is still in love with her.  Of course lots of secret moments take place as they try to figure out if they're crazy and trying to keep the secret from Shepherd's new husband (a young Ryan O'Neal) and from Downey's girlfriend (a very young Mary Stuart Masterson).  Of course it doesn't quite end happily, but I still like watching it on TV.

I haven't seen Chaplin or Natural Born Killers (I know, I know, I'll get to it).  But he's really good in some really bad movies.  Only You was one of the many vehicles for Marisa Tomei after she won the Oscar for My Cousin Vinny and ended up as one of those cheesy, romantic comedies that always end up as part of a DVD package or in the bargain bin.  That doesn't diminish RDJ's performance though - he tricks her into believing he's someone else so they can stay together and then of course charms her into actually falling in love with him.  It's a silly, over the top movie that gives "chick flicks" a bad name, but he's so much fun to watch it's almost bearable.

Then there are are whole bunch of movies in his career that I've neither seen nor heard of, but I'm sure he's probably pretty good.  I think those were his particularly destructive drug soaked years.  But he appears in a supporting role in Wonder Boys and reminds us he would be terrific if he could keep it together.  He plays Michael Douglas' gay literary agent in town to pressure him to finish his second book.  He doesn't have a lot of screen time or tons of lines, but he brings his insanity to each of them and helps Douglas and Maguire through their pot-smoking weekend. 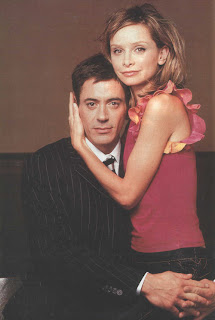 After Wonder Boys and all the real-life drug issues, I'm guessing it was hard to get a job or people to trust him, and he was offered a terrific part on the hugely popular Ally McBeal.  I remember the year he was on the show and my girlfriends and I would gather each week to watch the show in someone's dorm room and swoon over how amazing his character, Larry Paul, was on the show.  We loved him, and reprofessed our previous love from the 80s and thought, "Hooray, not only is RDJ back,  he's got a terrific job that we can watch weekly".  He played a lawyer with a lot of baggage, like ex-wives and a child, who Ally falls for, finally.  His opening scenes are priceless when Ally bursts into his office which is where her shrink used to work, so she assumes Larry is also a shrink and she tells him her problems.  Larry doesn't let on that he's a lawyer not a shrink and we get to see him give her advice but only as someone who wants to date her later.  Just before the big wedding episode RDJ famously got arrested again for drugs and guns charges which violated previous parole and he was sent back to jail, and along with Ally in TV land, the rest of us were devastated by the loss.

From a career perspective, it might not have been a bad idea to get clean.  He's created some amazing films since leaving Ally.  Many of them I've reviewed after watching them for the first time, including Sherlock Holmes, Iron Man and Iron Man 2, Tropic Thunder, Gothika and Kiss, Kiss, Bang Bang.  The last two I cannot recommend enough as off-the-beaten-track kinds of movies.  I don't usually watch thrillers (nightmares) and Val Kilmer is enough to turn me off, but I really liked both of these.  Gothika was Halle Berry's vehicle as a psychiatrist who has a crazy spell and ends up as a patient in her own hospital where RDJ is a fellow doc trying to help her figure out what's making her crazy and what happened to her.  It's a good thriller/ghost story/mystery.    And Kiss Kiss Bang Bang is much much funnier than I expected.  RDJ plays a thief accidentally cast in a Hollywood movie.  Rachel's Review is better than my memory will give you.

Thanks for the link love! Soapdish is the same for me too at remembering RDJ. When he looks like he's choking on bile at the end, claiming "Yeah, well we knew that," about Montana being a he, I still die laughing. I actually just watched this a few months back. It was on Hulu's, a shiny gem in a pile of crap movies they show.

Robert Downey Jr. is one of the few men who gets better looking with age!