Sex and the City 2: Review (Spoilers) 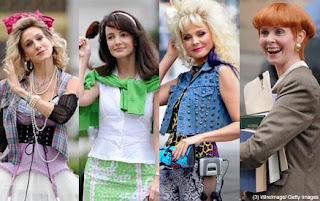 I have a great big, "I told you so coming" from all the people who didn't think the new Sex and the City 2 movie would be good.  I really liked the first movie, and of course the series was terrific so I assumed they'd just do a bit more of the same - focusing on a different character than the previous movie, possibly Charlotte dealing with motherhood, Miranda dealing with her job and family or possibly bringing in a new man for Samantha.  Okay, they did all of those things, for the first 15 minutes of the movie, resolving the problems in the last 5 minutes of the movie.  The first 15 minutes had a terrifically over the top wedding between Anthony and Stanford (Carrie and Charlotte's best gay guy friends).  Liza Minelli performs the ceremony (the best line - "When this much gay energy is concentrated in one place, Liza manifests") and sings "Single Ladies".  The middle 2 hours of the movie were so dreadful, I almost left the theater.  Since I'm warning you not to see this movie, I'm going to spoil as much as I can.  Samantha is offered a trip to Abu Dhabi to possibly do publicity for a hotel.  She brings the girls with her, they have a lovely hotel, lavish time, and then become stupid, oblivious, racists (well mostly Samantha, but the others aren't much better).  Carrie runs into her ex-Aiden, they kiss and rather than keeping her mouth shut about an anonymous kiss around the world, she tells everyone, making her already tenuous marriage to boring Mr. Big a bit more tenuous.  Meanwhile, Charlotte and Miranda bond over the guilt of motherhood and the inability to be complete or perfect while just being a mom.  Samantha decides to defy both laws, culture, and fairly common decency by getting it on with a guy in Abu Dhabi.  She's arrested and her cushy trip is revoked.  However, Carrie forgot her passport at a store in the spice market, so before they can leave they have to get it back.  Of course the nice shoe store manager still has it, but menopausal Samantha drops her purse and condoms pop out, and she's collecting them in her less than covering clothes and starts to be accosted by Arab men (she is swearing at them, hip thrusting, and yelling about sex).  Two full bhurka covered women bring the girls to safety and reveal that they all wear super fashionable clothes under their bhurkas.   There is almost nothing believable about their trip.  Women this highly educated and professional would hardly expect to be allowed to escape either the laws or the custom of keeping yourself covered in a muslim country, particularly when all the women around them are already doing that.  Yes, Samantha is over the top back home, but I don't think she's dumb enough given that she works in publicity to think she can get away with whatever she wants.

There are a few funny moments, only in the beginning, particularly at the wedding and when they show us what the girls looked like when they all met years ago (image).  Do not go see this if you liked Sex and the City.  This is like a typical single episode surrounding a really, really bad movie in the middle.  1.5 lambs/stars  The .5 is because the clothes are fun, typically ridiculous, but gorgeous.
Posted by Jess at 3:28 PM

Wow - that sounds just awful. Might have to see it now just to experience that for myself. ;)