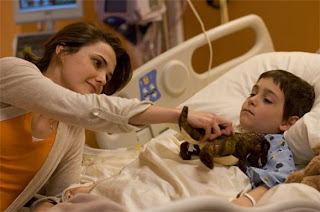 I've been spending a lot of time writing my dissertation, and one of the techniques I often use to stay organized is to outline a paper I've already written to be sure it says what I want it to say.  I think Hollywood could learn a lot from this technique - particularly in marketing films.  The trailer is basically an outline for a movie after the movie's been made - hopefully without giving the ending away.  However, trailers often tell a story that has nothing (or very little) to do with the movie they're describing.  I would really have liked to see the movie that the trailer for Extraordinary Measures advertised.  It seemed like somewhere between Medicine Man and Lorenzo's Oil.  Nothing remarkable, but I liked both of those so I figured I'd enjoy this.  However, Extraordinary Measures is a bit more like a fictionalized Sicko, bemoaning the problems of creating new drugs and testing those drugs and ultimately bringing them to market.  Now I'm all for the privately funded research - competition for the big bucks often means drugs can get produced faster, but if it's not for an ailment that will happen to millions of people, it's hardly profitable, and will likely never get far beyond research.  This movie does a pretty good job of explaining that dilemma - how to get research into the medicine cabinet for the highest profit.  Harrison Ford is the curmudgeonly (but surprisingly greedy) researcher and Brendan Fraser is the Harvard Business grad who starts a biotech company to get Ford's drugs to market so his kids can be treated.  That was what I thought a lot of the movie would be about - his kids and what they were going through.  That was kind of a red herring - it's really about the drug industry.  It was not terrible, but fairly boring, none of the characters are well developed or particularly interesting.  Keri Russell as Fraser's wife does the best job of actually acting, and we never even learn the name of the couple's third kid, he's just around.  2 of 5 stars/lambs 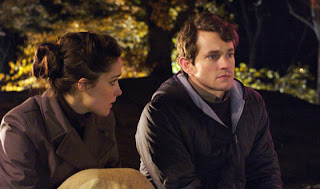 The other movie, Adam, was better than advertised.  I read a review in the New York Times quite a long time ago, and when Netflix sent it I'd nearly forgotten about it.  The movie stars Hugh Dancy as the title character, a high functioning man with Asperger's Syndrome in New York City whose life and rigid routine have been upset when his father dies.  He meets Beth (Damages' Rose Byrne) when she moves in upstairs.  Adam is able to work, take care of himself, and interact with people for the most part.  Disruptions from his routine or loud places or people who don't say exactly what they mean make things difficult for him.  However, Rose finds herself falling for his kind nature and intensity.  Beth's life is slowly falling apart - her father's been indicted for business tax fraud and that doesn't end well, and crushes her image of her father.  Adams loses his job, and is forced to find another so he won't have to move out of his apartment.  Beth helps him practice all the skills he lacks due to the Asperger's for having a good interview - eye contact, hand shakes and greetings, not to talk too much, when to recognize when people aren't interested anymore, etc.  Asperger's means he cannot interpret other people's emotions - he lacks empathy, though if a situation is explained to him, he can have lots of sympathy, he just can't put himself in other people's shoes (nor understand what the idiom means in the first place - why would you want to put on someone else's shoes?).  I thought the storytelling was really similar to last year's (500) Days of Summer in that things work out differently than you expect they might, it's not a happy ending, but it's not sad either.  Though, also like Summer, the indie vibe it gives off isn't boring or pretentious.   Great acting by both Dancy and Byrne (though she occasionally falls into her droopy-eyed moments that she milks in Damages).  Peter Gallagher is perfectly cast as her smarmy father too.  3.5 of 5 stars/lambs
Posted by Jess at 1:42 PM

Pretty encouraging words about Adam, a movie I was never all that interested in, though that might just be because I have trouble taking seriously anyone named Hugh Dancy.

Fletch, LOL. Maybe think of him as Mr. Claire Danes instead.