We have another addition to the leader board.  Well done Dylan from Man, I love Films.


Last week's clue:  Conmen try to rob a department store on Christmas and one of Santa's elves goes into business with an evil corporation who wants to eliminate Santa. 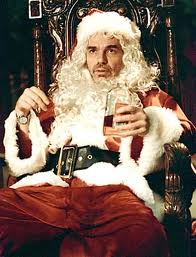 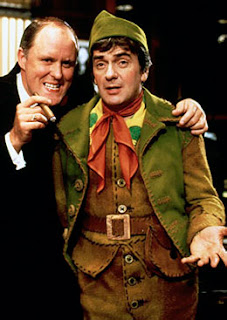 
New clue:  A couple of entertainers band together to save a friend's Inn in Vermont while a crazy family drives each other nuts and burns down the Christmas tree.

HINT: Yes, there's a theme.
The goal is to figure out the two movies who overlap in some words creating a new movie described by the clue.  Leave your answer in the comments. Good luck!
Posted by Jess at 9:21 PM 1 comment: 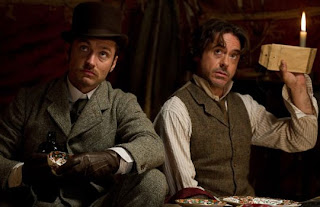 I was among the few really looking forward to seeing the sequel.  And thankfully I wasn't disappointed by the film.  The movie theater, however, was another story.  The film broke down twice, so there are segments, that I'm guessing are hysterical, that I cannot comment about as they skipped ahead a bit both times.  But we got a free movie ticket out of the 45 minute wait.  And I'll see this again I'm sure, so I'm not too worried.  But here's what I thought.

*Spoilers if you haven't seen the trailer, otherwise, nothing* 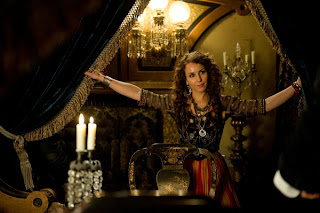 The film picks up right where the old one left off.  Holmes (Robert Downey, Jr.) is trying to figure out exactly who Irene Adler (Rachel McAdams) is working for.  He and Watson (Jude Law) saved the world from destruction, but now Holmes has to survive Watson's wedding to Mary (Kelly Reilly), and first his bachelor party.  We find out Ms. Adler is working for Prof. Moriarty, and that doesn't go too well for her.  Holmes wants to figure out Moriarty's plans and stop them of course.  This leads him to plan Watson's bachelor party (or half-assed plan) at a dance hall that has fortune tellers, where he meets Simza (Noomi Rapace) whose brother is wrapped up in all of the problems.  She's a gypsy, handy with a knife, and Holmes has to try to keep her alive, which she's more than capable of doing alone.

So we follow these adventures, the rest of which are mostly based on Moriarty threatening to hurt all the people in Holmes' life.  The action is good; the stylized fighting and mental preparation by Holmes is entertaining as well as engaging.  The story is a little more complicated than it really needs to be - something about Moriarty attempting to trigger war and then reap the financial benefits from it - and doesn't seem fitting for Moriarty's infamous brilliance.  However, there were some pretty great "meta" moments where they link the story to the original novels, but I won't give those away at all.  Just know that they're there. 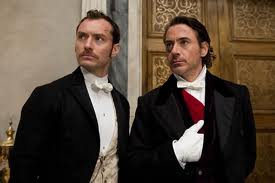 Downey, Jr. and Law were really great interacting again.  They had terrific chemistry, with Watson being continuously annoyed with Holmes and Holmes attempting to keep Watson all to himself.  Noomi Rapace (famous for the Swedish version of The Girl with the Dragon Tattoo) was good, but her role was relatively limited, it was mostly a place holder kind of role and she didn't need to do a lot, but at least it might give her the chance to do more in Hollywood, because what she did do was terrific, she just wasn't a big part of the film in general.  I liked it, but it wasn't better than the original, and if you're one of those who just liked the first one, you'll like this one, but you can wait for DVD.  Here's my review of the original, which I gave 4.5 stars, and this one I'd give a solid 4 stars/lambs.
Posted by Jess at 8:57 PM 1 comment:

Okay, you've heard me talk about this on the podcast.  I've been attempting to purge my DVD shelf.  And you, my devoted readers are the beneficiaries of this purge.   I know this isn't a ton of movies, but I had to start somewhere, and these 15 were movies I felt I could actually part with.  There are some really great movies on this list so I feel like explaining why I don't want to give them space on my shelf. 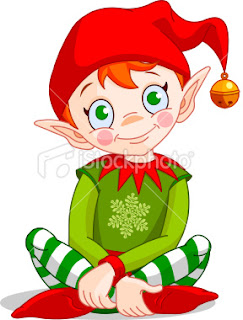 1.  I haven't watched them since I bought them.  - Sadly, this is true.  I have seen them all, either in theaters or by rental, but just haven't found the desire in the year or more since I owned them to watch them.

2.  I have seen them enough times that I honestly don't foresee watching them again. -  Because we watch so many movies for Reel Insight (which I still love) there isn't really a lot of time for my lesser chosen movies to make it off the shelf.

So here's how it'll go - leave a comment and either tell me how insane I am for giving up one of these films or stake your claim - first come first served.  Please only kind mocking for the fact that I owned some of these movies in the first place (mean people suck).  And all of these played just fine or they're brand new and never watched so I can't vouch either way for their playing.   I'll send them out after Christmas unless you specifically feel the need to get 'em early.   Willing to send anywhere.

I'll admit, the winning combo last week still makes me giggle.  And it was a welcome back to Ryan, we'll see if he maintains his previous dominance.


Last week's clue: New clue: A nerd figures out a new way to chose pro-ball players and one ends up working for the FBI playing ping-pong. 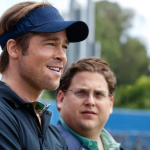 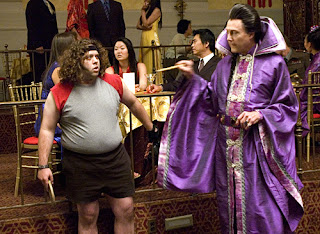 New clue:  Conmen try to rob a department store on Christmas and one of Santa's elves goes into business with an evil corporation who wants to eliminate Santa

The goal is to figure out the two movies who overlap in some words creating a new movie described by the clue.  Leave your answer in the comments. Good luck!
Posted by Jess at 2:11 PM 3 comments:

It only took 67 episodes to get to one of my favorite actors of all time.  The weird thing is, it's based almost exclusively on a more than 10-year-old crush, and some very recent good work.  But that's in the second half of the show.  First, Rachel and I discuss some new movies we've seen - all 2011 releases, some DVD and some in theaters, particularly Our Idiot Brother, Friends with Benefits, It's Kind of a Funny Story, and Drive.  Our random discussion goes into spoilers - whether we try to avoid them, and what constitutes one in the first place (fair warning - if you haven't seen The Sixth Sense, Psycho or The Usual Suspects, this "might" spoil the big reveal, and seriously what are you waiting for?).  Send us your feed back before Dec. 21 to make it into the next show.  Enjoy.

New movies with RDJ this week:
Natural Born Killers - Oliver Stone and Quentin Tarantino should not be allowed to make movies together.  The story of two homicidal maniacs, the movie tries to show what demons they really were.  However, it does it by using the media to prove that the rest of the world encouraged their insanity.  RDJ plays the host of a True Crimes TV show that is profiling the married couple (played with flair, if not talent, by Woody Harrelson and Juliette Lewis).  Of course eventually he ends up the topic of his show rather than the host, but in general it's just way over the top trying to put together a crazy movie.  There are moments when they're pretending Lewis' childhood is really an episode of "Leave it to Beaver", but they're saying horrible things about abuse and whatnot, and the juxtaposition sounds like it would be interesting, but it really doesn't work.  Just makes everyone in a lunatic. 1 of 5 stars/lambs
A Scanner Darkly - This movie is much better than the way it was made suggests.  The painted animation over live-action is not particularly interesting.  But the story is a fascinating look at identity and who controls your identity - you, society or a little of both.  Keanu Reeves (sort of) plays a cop who has been assigned to infiltrated a drug den of Woody Harrelson and RDJ to find their suppliers.  It's a little way into the future and a large segment of the population is addicted to substance D.  Reeves also becomes addicted (to fit in) and loses the ability to distinguish between his real life and his overcover life.  One of the really neat things the movie does, that probably requires the strange animation to pull of is the cops' outfits.  They wear specially designed suits that completely protect their identity, even from one another.  It means you never really know who might be a cop.  RDJ does the drug dealer fast talking over the top cuckoo really well.  I really want to watch it again already.  3.5 of 5 stars.  If you like the animation this is awesome.  I found it hard to watch.
Air America - Much in the spirit of Good Morning, Vietnam, this movie takes a good look at what the US was doing in Southeast Asia in the 1960s and 1970s.  Specifically, this is the story of pilots working for a US company (think Blackwater) that supplies refugees in Laos.  Nixon has denied the war has moved to Laos, so it's all hidden or off the books.  Mel Gibson (in all his 1990s glory) is a pilot - but he's been sequestering guns all over the country as his "retirement" and he's just about had it pretending that they're not supporting the drug trade and arming both sides of the conflict in Vietnam.  RDJ has just arrived as a young hot shot, and likes the politics and moral questions even less.  It's a good movie, and does make you think that in 15 years we'll see movies like this about Iraq and Afghanistan.  3.5 of 5 stars/lambs
Posted by Jess at 6:46 PM No comments:

Crap, I didn't want this to happen again where I didn't post anything between mashups, but finals are approaching and hopefully it won't continue.  But for now I'll just say congrats to SDG for his win in the new round of score-keeping.


Last week's clue: A writer spends time in the City of Lights and is transported to meet his heroes in short vignettes that show off the great neighborhoods and tell stories of happy, sad, tragic and touching relationships. 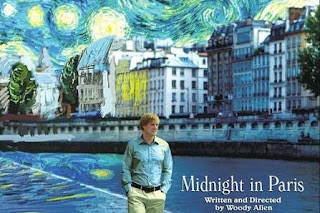 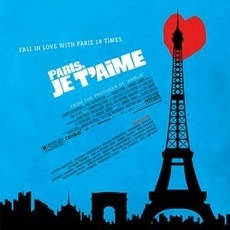 New clue: A nerd figures out a new way to chose pro-ball players and one ends up working for the FBI playing ping-pong.The goal is to figure out the two movies who overlap in some words creating a new movie described by the clue.  Leave your answer in the comments. Good luck!
Posted by Jess at 8:37 PM 1 comment: