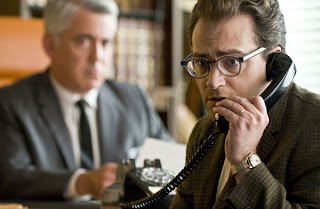 I was raised Catholic, and have a strong understanding of my own faith (if not a belief in it all). Similarly, I have a Jewish godmother, many Jewish friends, and dated a Jewish guy for a long time. So I didn't have the same problems with all the Jewish inside jokes that many reviewers seem to have had with the movie. Many assumed that if they understood all the inside references, they would have liked the movie better. I doubt it. Perhaps they were saying all the jokes in Hebrew or Yiddish, so I didn't get any of those, but I doubt that too. As a movie, it has certain good qualities, the story has many different characters that are likeable and unlikeable. I liked the antihero - Larry Gropnik, and thought the actor did a terrific job avoiding falling into the insane depths of despair his character had the right to do given the hardships he's going through. The story doesn't actually tell a very interesting story, though it has some themes that resonated with me. The story is basically, Gropnik's wife wants a divorce, his daughter's stealing from him, his son's a moron about to be bar mitzfahed, one of his student's is bribing him, one of his neighbor's a jerk, the other is a sexpot. Basically, nothing particularly original or interesting. The theme that I liked was the idea of "doing nothing". His marriage fell apart because he didn't do anything. He won't get tenure because he didn't do anything. He is slowly losing his land to his neighbor because he doesn't do anything. Basically, the movie seems to be saying that it's important to take an interest in your life and that just coasting through won't get you the life you'd like. As with most Coen Brothers movies, they don't hit you in the face with anything in particular, and this movie does very little as well. I didn't like it, and think the people who thought it was hilarious are crazy. Okay, there were a few moments when Gropnik is seeking advice from an odd assortment of rabbis that were humorous. Hardly redeeming. 2 of 5 stars/lambs
However, if you'd like to read a funny review of this movie, check out Fletch's at Blog Cabins
Posted by Jess at 1:16 PM

I didn't care for it either. But I was one of those that thought I didn't know enough about the Jewish faith/culture to understand what the eff was being said. The only parts that really tickled my funny bone were Larry and his wife discussing their issues.

Aw - thanks for the plug, Jess. Even I didn't remember what I'd written for it.

I'd still like to watch it again sometime, and it's been long enough now that I probably could. One day.