Friday Night Lights is coming back, get ready! 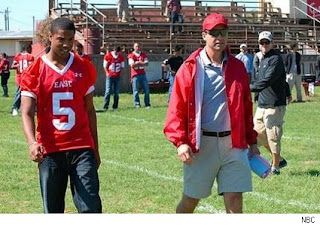 Friday, May 7 at 8pm on NBC, the fourth season of Friday Night Lights will begin its run anew.  With the deal between DirectTV and NBC, we got a bonus 2 seasons of FNL, and it was worth every penny.  Taking advantage of my dad's DirectTV subscription, I've already seen and LOVED season 4.  The first season was amazing, introducing characters and stories that were some of the best on TV.  Definitely was the introduction of the most function marriage on television in a long time.  Season 2 went off the rails a bit with the whole Landry/Tyra murder story.  Season 3 brought us our first villains with the McCoys (JD and his dad).  Now in Season 4, our beloved coach has been fired from the Dillon Panthers, but hired at the new East Dillon High to coach the Lions.  The field is a joke compared to the turf the Pathers played on.  There are no boosters to speak of, and the strength of the team is fairly limited.  We get to meet some wonderful new characters and catch up with some old ones.  I can't wait to watch it all again.   Michael B. Jordan (pictured), from the terrific season 4 of The Wire, is a new player on the Lions, trying to escape his legal troubles by turning his life around.  You can always trust FNL not to be cliched or overly dramatic, and they tell his story really well.  Jurnee Smollett plays a cheerleader at East Dillon who used to date Jordan, but now finds my fav Landry Clarke (Jesse Plemons) intriguing.  I won't tell you which characters return and which ones don't, but just trust the show will still be awesome.
Posted by Jess at 12:14 PM

I've never watched this. Can I jump in or do I need to have seen the past seasons? I am relying here on my favorite television critic.

You can definitely jump in!!!! It's always good and they catch you up every episode.