Sorry, I can't post the Monday musical today because I must write about the finale of Lost that aired last night.  Yes, there are spoilers after the first paragraph so if you actually care about seeing it fresh, skip the rest of this post.  I don't think I caught the first season live, I think I caught it on DVD later, and then watched the rest live.  I haven't always loved it and there were definitely episodes I didn't pay any attention to and I would never say I've understood an entire episode, but I have to say, the finale did give me a lot of closure.   I enjoyed it; I think I kind of understand what happened; and it didn't piss me off or leave me feeling like a movie needs to be made to give me more of these characters.   This review is not for the casual watcher - there are too many things to explain and very few make sense, so only if you watched it and want my take on what happened will this make sense. - Jess 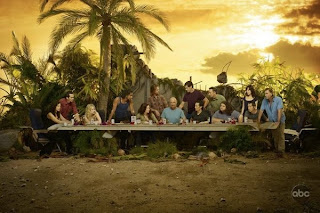 So on Tuesday we saw that Jack had become the new Jacob - which I think means something like Jack had been assigned the duty of making sure that evil (Locke) doesn't escape the island and take over the world, and that Jack had to protect the light - the good - from Locke.   The sub had been blown up, but there's still a plane that can take people off the island.  So most of them are trying to get to the other island.  Miles finds Richard in the forest where Locke left him to die, and they head for the plane.  While traveling by dugout canoe they find Lapidus in the water (Rachel, he wasn't dead, who knew?!) and they realize now they can actually fly the plane.  Meanwhile, Locke has returned with Ben to find the well where they dumped Desmond.  He's gone, but they follow some dog tracks (yes, Vincent lives) to a hut where Rose and Bernard have been happily existing this whole time.  I actually always liked them, kinda calm and relaxed people among the crazy.  Dez swaps his life for Rose and Bernard and leaves with Locke and Ben.  I don't remember how, but somehow Locke, Ben, and Dez meet up with Jack, Sawyer, Hurley, and Kate at the pool of light.  Jack's decided he'll let Locke do what he wants and then kill Locke afterward.  This is where it doesn't make much sense.  Dez goes down the light waterfall, moves a stone, and the light goes out and earthquakes start (presumably to send the island to the bottom of the ocean).  This makes Locke mortal - no longer a smoke monster.  Thus, when he and Jack fight, even though he stabs Jack in the gut and in the neck, Jack still manages to kill him.  However, the island is having earthquakes and Jack realizes he has to put the stone back to make the light come back.  Sawyer and Kate have left to catch the plane, but Hurley and Ben go help Jack go down the light waterfall.  Because he knows it'll kill him, Jack anoints Hurley to take his place (become the new protector), and Hurley makes Ben his #2.   Jack goes down, moves the stone, saves Desmond, and basically dies.  We also see the plane take off with Kate, Sawyer, Miles, Richard, and Lapidus.  The End of life on the island.  All's well that ends well.

Meanwhile, in the sideways world (where the plane didn't crash), Dez, who has remembered what happened on the island and become enlightened and enlightened Hurley are trying to enlighten everyone else.  They broke Kate and Sayid out of jail, and now Kate is attending a party with Claire and Dez that Charlie and Daniel Faraday are playing (backstage Daniel and Charlotte meet for the first time and sense a connection).  Claire goes into labor and Kate helps her deliver the baby, just like on the island, and they both become enlightened - which seems to mean they're very happy and remembering all the good stuff that brought them together in the past.  Charlie arrives after the birth and the deja vu hits him and he becomes enlightened.  Jin and Sun are in the hospital and it turns out Juliette is their baby doctor (oh, and the mother of Jack's son - Rachel, you called it), and seeing the baby on the monitor with Juliette enlightens Sun, and Jin realizes he loves his wife and he's enlightened.  Also, it means they both remember how to speak English - very fast Rosetta stone, like "the intersect" on Chuck.  Sawyer and Juliette run into each other and their witty banter brings them back to the island and they're enlightened.  Hurley's been driving around trying to find Shannon and Boone, and when Sayid goes to help Shannon, they're enlightened and remember they were in love (until Shannon was shot).  Oh yeah, Jack operated on Locke's broken back, and when Locke gets the feeling back in his feet, he becomes enlightened.  So only Jack is left.  He goes to the party where Claire had her baby, and runs into Kate.  He sees images of their love, but isn't yet enlightened.  She brings him to this church where his father's body has been brought.  He goes inside, and the coffin is empty, but it enlightens Jack some more.  His father appears and explains to him that he's dead - and that at some point everyone is, some before you, some after.  Slow that I am, I finally realized all the images around them are from all the religions - crucifixes, menorah, moon and stars, etc.  Basically, the Lost creators were trying to be all-encompassing in their finale, but it definitely left out atheists.  I think they were trying to say that the sideways world was "heaven/nirvana/afterlife place" where you went to learn things about your life and connect with the people from the most powerful parts of your life.  When you are enlightened, it will all come together and that will be the end.  It kind of worked that way.  I like it because they did a good job making all the nice moments of the series, the love, the triumph, adventure, etc. become the most important parts.   Basically, it is better to have loved and "lost" than never to have loved at all because eventually everything comes back to you, even if you're dead.  Trite, maybe, but maybe just cheesy.  I'll have to wait to read more commentary to find out if I'm even close.  But that's my best guess.  I wasn't blown away, it was confusing, and took some time to digest, but overall I liked it.

PS - If you can, watch some of the alternate endings they did on Jimmy Kimmel last night too.

Your interpretation is basically what I got, but instead of an actual heaven, I'm thinking the flashsideways was a purgatory, and once everyone was enlightened and considered themselves "ready" they would move on to some version of heaven, which is what happened when the light filled the church.

Of course there seem to be loads of plotholes (or questions) remaining as far as this purgatory theory goes, but at least we got some closure. I didn't really care for the ending at first, as I didn't fully understand it, but I'm slowly coming around. Another viewing is definitely in order.

Why is Lost so twisted. I love reading perspectives on the end, even though I'm not really that invested in it.