Death at a Funeral: Redux

Rachel over at Rachel's Reel Reviews has been using a technique in her posts lately that lets you know what she's really thinking.  In an homage (not stealing, homage, really) to her, I'm going to do the same for my review of a remake of an recently made British movie, now an American movie, Death at a Funeral.   Hopefully this will illustrate how similar the two really are.   Below is the exact review I wrote for the British version, with some edits.  A few extra actor names were added that I didn't bother with in the original.

A British farce that's centered around the death of a patriarch. The two sons have returned to bury their father. The elder, Daniel (Matthew Macfadyen) Aaron (Chris Rock), lives in the family home with his fiancee, and the other, Robert Ryan (Martin Lawrence), is a successful author living in New York. Daniel Aaron is distraught and trying to figure out how to eulogize his father, while everyone arriving is disappointed that Robert Ryan won't be doing the eulogy. Their cousins arrive, one (Tracy Morgan) complainingly bringing Uncle Alfie Russell (Danny Glover) in his wheelchair, and the other (Zoe Saldana) bringing her fiancee (Alan Tudyk James Marsden) to introduce to her father. They stop to pick up her drug-dealing brother (Kris Marshall Columbus Short - from The Losers) on the way, and a mix-up in drug bottles occurs. Ultimately, Alan Tudyk James Marsden ends up really high on ecstasy, convinces people the coffin is moving, and then ends up naked on the roof. Peter Dinklage (yes, he's in both) shows up to blackmail the brothers with photos of him and their father in compromising positions. They fight with Dinklage, who is hysterical fighting for his rights to the inheritance and he ends up in the coffin. I won't give away the rest, and believe me there's a lot more and it's a constant chase between scenes to figure out who lives, who dies, and who gets away with what. It's terrific, and I highly recommend checking it out. 4 of 5 stars 3 of 5 stars/lambs 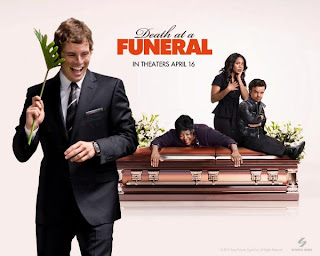 The only thing I would add is that this story so completely works when translated to an African-American cast, taking place in the US, speaks to the universal nature of the story.  All families have problems, and fight, but ultimately drive each other crazy and will definitely help you hide the bodies.  Also, while I LOVE Alan Tudyk, I think James Marsden was the funniest thing in the new movie (In the photo, he's listening to the fern sing).  His portrayal of a guy high on a hallucinogen was hysterical.  His facial expressions and elasticity could rival Jim Carrey at his best.  Also, I was nervous that Tracy Morgan would just be the mumbling buffoon he plays on TV, but someone made him enunciate and it actually improved his acting immeasurably.  Good, but not great, though if you haven't see the original, it's so similar you'd probably give it the 4 I gave the other one.
Posted by Jess at 9:47 AM

Ha! Thanks for the homage! I sometimes think "Am I using the strike through too much?" Then I remember I don't care and use it anyway. Good job!