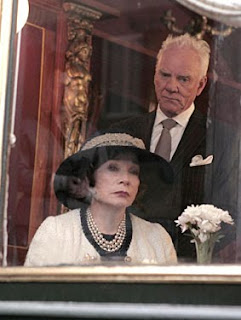 In the past 2 years there have been as many adaptations of the life of fashion designer and icon "Coco" Chanel.  One, a Lifetime movie Coco Chanel, starring Shirley MacLaine as Coco in her later years and Barbora Bobulova as the young Coco.  The second, Coco avant Chanel (Coco Before Chanel), is a French language film and stars Audry Tautou as Coco the whole time.  Both stories describe her early days as a seamstress by day and cabaret/saloon singer at night in the turn of the century in France.  She decides the only way to overcome her humble beginnings (she was dropped off with her sister for the nuns to raise after her mom died) is to become a mistress to a wealthy aristocratic man.  She meets girlfriends of her lover and they love the hats she makes.  She starts working harder, making hats and becoming better known for it, as well as the clothes and style she wears herself.  It's more of a mens-wear inspired fashion (the Tautou version show's her cutting up men's shirts to sew into her dresses to change the look) and wears pants and looser fitting clothes without corsets.  She eventually falls in love with a guy named Boy, who can't marry her, but he helps set her up with her own stores and her fashion ideas increase. ** Spoiler -  Eventually Boy is killed in a car crash - End Spoiler ** and yada, yada, yada, she becomes Coco Chanel.  That's the story told by both versions.  The Tautou story ends there with a quick look at her much later watching her own fashion go down the stairs at her couture house (also an image repeated in the MacLaine version). 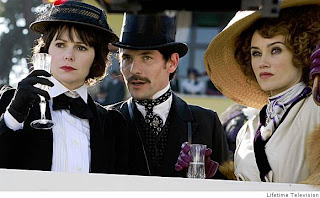 However, I thought the MacLaine version superior because it doesn't just give us a short glimpse into the salty beginnings of a legend, but alternates with her at the end of her career, after she's becoming a household name with the suits and the little black dress.  Tautou is good, as the moody, determined, ambitious Coco, but we see very little of her inspiration and why she bothers to become a fashionista.  Bobulova does a better job making it clear she was mining one of the few avenues open to women and using the only skills she possessed besides her body.  They show how her style evolved, and why she went the directions she chose (expensive fabric wasn't available during the war years so she wanted to make clothes women could afford and replicate - jersey became fashionable and corsets were done). 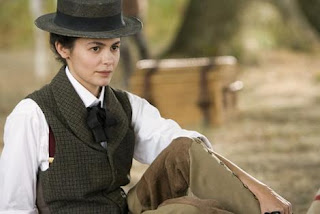 However, both films fail to give a clear picture of the woman.  Wikipedia adds a lot more about her involvement with both sides during WWII, and her decline as a French designer due to perceived collaborations with the Nazis, and her fan base switching to British and American audiences.  She also had affairs with many famous people, and I guess a new film opened at Cannes last year about her time with Igor Stravinsky, but it's not on DVD yet.  Both are good films, but whitewash a much more complicated woman.  If you're only going to watch one of these, I'd watch Coco Chanel for the more interesting characters.  Coco Avant Chanel - 3 stars/lambs, Coco Chanel - 4 stars/lambs
Posted by Jess at 12:55 PM