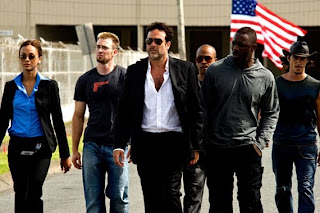 There weren't a lot of options for movie viewing this past weekend, and I'll admit, my love for The Wire is what lead me towards The Losers knowing Idris Elba was in it. He had a small part, but still brought his A game. The Losers, I have since learned, is based on a comic book, which explains a lot of the graphics and some of the shots throughout the film. However, if you didn't know it was based on a comic, it doesn't matter to the movie at all. It's a campy, exciting, action movie. Jeffrey Dean Morgan leads a military unit with Elba, Chris Evans (this movie convinced me he will be a great Captain America), and two lesser known actors, Columbus Short (who I really liked on Studio 60 on the Sunset Strip), and Oscar Jaenada (better known in Spanish language films). They are sent to Bolivia to take out a target but then they become the target. In a fairly odd contrivance, a bunch of kids are killed instead of the team. Figuring they're abandoned, the team gets stuck living in Bolivia without identities or any way to get home. Then Zoe Saldana arrives and hires them to kill the guy who tried kill them - a psychopath named Max (played for laughs and insanity by Jason Patric). She's suspect, but that doesn't stop Morgan from getting it on with her. Elba doesn't like her, but he really wants to get home, and Short has a baby on the way, so he'd really like to get him and tell his wife he's not dead. There's a lot of humor in the various moments when a different guy has to show off his expertise - Evans on computers, Short with transportation, and Jaenada as a sniper. There are lots of shootouts, double crossings, a little bit of mystery and Morgan trying to still be the sexy heart throb he was able to pull off on Grey's Anatomy that I don't think he's been able to duplicate since. Patric plays a terrific psycho bad guy who kills anyone who gets in his way, and that's where a lot of the humor comes from too. Overall, it's not particularly complicated, but it also doesn't try to be more than its source material, not too long, and not too serious. I liked it, and would definitely watch potential sequels (though the box office returns are low enough I doubt there will be any).
3 of 5 stars/lambs
Posted by Jess at 10:49 AM