New Releases: Up in the Air and It's Complicated 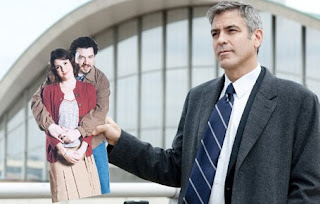 I'm oddly conflicted about probably the best movie of the year. To explain, I spend my days right now staring at satellite and aerial photos of deforestation in Central Africa (the topic of my dissertation), particularly dealing with cloud cover issues. So seeing all those images in Up in the Air that were taken from planes showing all the different landscapes across the US gave me terrible anxiety because I was avoiding my work by going to the movies. However, I love to travel, particularly mastering the art of easy travel. So watching George Clooney explain to his new protege about how to avoid wasting time traveling was like watching my hero explaining his superpowers. This is to explain I have a very odd connection and avoidance of this movie. Hopefully by the next time I see it, I'll have finished my degree and not have to worry about those anxious moments watching clouds (I'm aware that's an incredibly odd reaction, but someone's gotta study this stuff) and just think of it as watching a movie about a traveling superhero. The plot is pretty clear from the commercials, and luckily they don't give much away that is important to the story. George Clooney works for a firm that is hired by big companies to come in and fire people. He flies all over the country doing it. Up-and-comer Anna Kendrick thinks the company can save it's extensive travel budget if they start using technology and start firing people over computers (sort of like "Skype-Fire"). Clooney thinks this is a terrible idea because they have to help the people they fire get through the moment of being fired, and this requires a personal touch. His boss (perfectly incompetent Jason Bateman) thinks he needs to prove it to Kendrick, so they go out on the road together. The extensive cast of people being fired makes this movie feel uncomfortably real (apparently many of them are recently unemployed people getting a chance to redo their final interviews) and adds moments that strung together with Clooney's journey (emotionally, not physically, though they do hit a lot of cities) make for a terrific movie. J.K. Simmons plays a man being fired, and he goes from being hurt to angry to ashamed to hopeful in the course of just a few minutes and a few words from Kendrick and Clooney. Jason Reitman is a terrific director and as long as he keeps making movies that suit his style, he'll hit it out of the park every time. Just to be fair, Vera Farmiga has a terrific role as Clooney's girlfriend who's as emotionally distant as he is. 5 of 5 stars/lambs 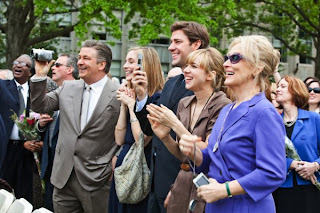 The other film I saw this weekend is the Meryl Streep, Alec Baldwin and Steve Martin movie, It's Complicated which does a pretty great job of showing off what terrific actors the trio has become. Alec Baldwin is hilarious and has mastered slapstick comedy (both physical and dialogue as he demonstrates weekly on "30 Rock") and Meryl Streep is both funny and sympathetic as the divorced mother of 3 grown up children who is rediscovering her relationship with her ex-husband (Baldwin). Streep and Baldwin keep their rekindled relationship a secret from everyone (he's remarried) but of course get caught eventually by all - the scene is one of the funniest things I've seen this year. Steve Martin is also recently divorced and starts falling for Streep as he designs her new house. It's a really funny movie with many of the cliches of divorce present, but never overdone. John Krasinski plays the future husband of the oldest daughter, and often catches Streep and Baldwin, and his struggle to keep it to himself and prevent his future wife and sibling from finding out are hysterical. There's also a great scene where several adults get high and fun hijinks take place. It's not a movie for everyone, but I don't doubt that any adult child of divorced parents will see some of their life in the movie somewhere. Yes, Nancy Meyers movies always contain luxuriously wealthy people, and It's Complicated is no exception, but it's still a treat to see how the super wealthy live. It's basically what can happen to relationships when money isn't the major issue of the marriage or divorce.
4 of 5 stars/lambs

I loved "Up in the Air." Saw it last weekend and still thinking about it. Also saw "It's Complicated." I found some funny moments and thought Baldwin was terrific, but on the whole it didn't work for me, and I think I'm the target audience.

I enjoyed Up In the Air, but I'm afraid it didn't speak to me as it did for you; it's simply an entertaining movie that captures a bit of the general feeling of Americans in 2009, but not one that I would place in the vault or anything. Great performances all around, though, and it maintained a good sense of humor despite the bleak proceedings.

No interest in the Streep/Baldwin affair, though.

I liked Up in the Air until the final few scenes, when my optimistic, romantic brain was dismayed by her infidelity and just never recovered. I loved your explanation of the work avoidance anxiety! We can just never get away from work for long, can we?

I'm kind of obsessed with "Up in the Air." I hope you get a chance to watch it without a pit in your stomach ... some of the people I know who have been on the other side of that table found it a little tougher to watch.

I'm kind of obsessed with "Up in the Air." I hope you get a chance to watch it without a pit in your stomach ... some of the people I know who have been on the other side of that table found it a little tougher to watch.

Up in the Air-A well-acted piece about a man's inability to cope with a world more real than the one he lives. And the screenplay just keeps on getting better and better. Nice review, check out mine when you can!