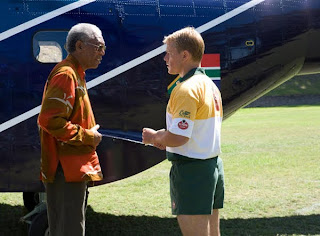 Conversation from the two other people leaving the matinee I saw on New Year's Day:

Man: Was that a sports movie or a political movie?
Woman: It was a spirit of man movie.
Man: You don't believe in that.
Woman: Yeah, you're right.

To some degree that summed up the movie - it's both a sports movie AND a political movie of South African politics as Mandela took office. And if you're the kind of person who believes in the spirits of men stories being worthwhile, it's most definitely that. Morgan Freeman, Matt Damon and director Clint Eastwood deserve all the accolades coming to them, particularly Freeman. To portray a living person is difficult, but to do so when that person is internationally known to the point of representing an entire country would seem impossible, but Freeman does it in a way I've never seen in his career. He transforms his physical appearance in ways that cannot be prosthetic - a hunch, a curved neck, shuffling gate, and possibly prosthetic teeth. In most of his roles Freeman appears physically similar (as do most actors) so it was amazing to see his simple transformations to seem more like the diminutive Mandela than himself. Damon does it too - adding tons of muscling weight to appear as a professional rugby player (as his previous self, I'm sure he'd have been torn to shreds just filming all the rugby scenes). And finally, Clint Eastwood's directing is simple, direct and doesn't make the sports scenes either particularly clear or confusing (just right for a sport I don't exactly understand). Mandela is the star of the story, but with the directing, you're never sure exactly how it all turns out.
A quick summary of the plot now that I've praised the stars: Nelson Mandela is let out of prison in South Africa in 1990. He runs for president and is elected in 1994. He knows someone and something has to unify the country that has so recently ended apartheid and now is led by the formerly oppressed. Mandela has the foresight to know that petty retribution will not help either the country nor the black South Africans. The Springboks, the national Rugby team beloved by Africaans, and also hated by blacks, has a chance to go to the World Cup because South Africa is hosting in 1995. Mandela enlists the help of Francois Pienaar (Damon), the captain of the Springboks, to make sure they succeed in unifying South Africa behind their team. I won't spoil the ending, and it's a terrific movie that I'll enjoy forever. Miracle came to mind a lot and the quality of both is wonderful. 5 of 5 stars/lambs

Incivtus did an excellent job of staying true to the spirit and message of Mandela, but had too much going wrong with it cinematically (the largest example being some of the awful music) for it to earn that high a rating from me. Still, an important movie that is as inspirational as they come.