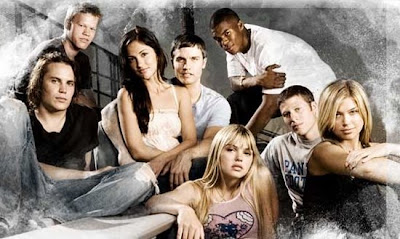 The wonderful "Friday Night Lights" is returning to NBC tomorrow (1/16) night. Yes, it's on a Friday night (which given the name makes it easy to find, so watch it). I've seen most of this season already thanks to a friend with Direct TV. And it's terrific. For those of you who hung around through the disastrous second season, you will be rewarded for your loyalty if you return to watch the third season. It's much more of the feeling of the first season, focused on football, and of course the personal relationships between the kids and adults, and even the graduates. This show does what other teen-based shows have never accomplished - actually sending off the kids who graduate in a way that makes you sure they'll continue being the characters you love. The incredible strength of the writing of this show lies in its ability to move characters around but still keep us interested in where they've gone. As for previews of the upcoming season - our wonderful graduate Brian "Smash" Williams (Gaius Charles) finally finds his way forward. Matt Saracen (Zack Gilford) will have some pretty difficult things to deal with, but of course finds a way to still be a good person and look for help from the many people who can help him. Tyra (Adrianne Palicki) falls back into her old ways, but eventually realizes she's still just a teenager and can't really act like an adult all the time. And finally, the dialogue between our favorite married couple just gets better and better. Please tune in to see this show, so we can have another season!
Posted by Jess at 9:05 AM