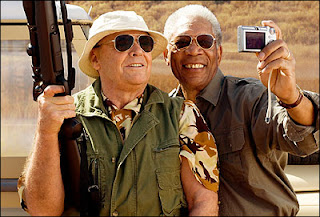 I'm really behind in seeing this movie, and I think it's actually been playing in a local theater for weeks and weeks, but we missed the showing of Spiderwick Chronicles, and the other options this weekend weren't good locally (I'm not a fan of horror), so The Bucket List was it. And for good entertainment, it hit the spot. Jack Nicholson and Morgan Freeman do a great job fighting and traveling and philosophizing about death. They're both handed a sentence of a few months to live, and Freeman starts writing a "bucket list" to record what he might want to do before he "kicks the bucket". Nicholson jumps on board, and luckily comes with the money, private jet, and personal assistant to do almost anything. They put some obscure things on the list (like observe something majestic) but also lots of easy to check of off kinds of things - get a tattoo and sky dive. The rest of the movie is them traveling around the world doing all kinds of things, and luckily deciding NOT to do some things - like hunting a big cat. I thought their dialogue was fun and witty, and it was the first movie where the co-stars could really hold their own against each other. Nicholson seemed on edge and unsure of how Freeman will respond, but it makes their characters more believable. Nicholson owns a huge company and has always been deferred to on everything, and while Freeman was a mechanic for 45 years (which they repeat a little too often) his "death sentence" has given him the freedom to do whatever he wants, including leaving his family to experience some of life he gave up for the family. It's a cute movie, with obviously sad overtones, but you can't really predict where it will all go. It's definitely cheesy, but for pure entertainment, it works really well. 4 of 5 stars.
Posted by Jess at 10:38 AM

I think you may have enjoyed this movie more than I did, but I agree with you about the entertainment part. Not a whole lot of quality, but it definitely was good for an occasional laugh.

Yeah, definitely not a lot of quality. A movie that morose really should have made me cry, but I didn't well up at all. I just liked the dialogue and some of the funny moments chuffed me. Entertaining, but I doubt I'll watch it again.

Spot on Jess! i really enjoyed this movie and Jack was better than I've seen him in a long time. The chemistry between Jack and Morgan was great. You know what was the kicker? I actually laughed until I cried in the "laugh until I cry" scene... Morgan's wheezing laugh did it for me, I couldn't stop and tears started flooding. I give it 4.5/5.

Great site, I look forward to reading more of it! I don't check out the LAMB as often as I should.