This was probably the most anticipated movie of the year for me.  I loved the book last year and have recommended it to everyone.  I even got to listen to the audiobook with Octavia Spencer reading the character she brings to life on the screen.  So I was well prepared going into this to thoroughly enjoy it and more than a little nervous it couldn't live up to my hopes.  I find in situations like this that it's rare a movie can actually live up to your expectations, but if it does a good job outside of what you expected, whether or not it met your hopes, doesn't really matter.   That was the case with The Help. 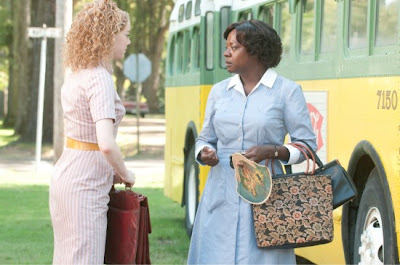 Based on the Kathryn Stockett novel, The Help is the story of two sets of Southern women in Jackson, Mississippi in 1963-1964.  One is the black women who work as maids for the other set of white women.  Eugenia "Skeeter" Phelan (Emma Stone) wants to be a writer and she's been advised by a NYC book editor (Mary Steenbergen) to write about something that bothers her.  When her good friend Hilly Holbrook (Bryce Dallas Howard) decides to start the "Home Help Sanitation Initiative" (a fancy term for making separate but equal bathrooms in private homes that aren't particularly separate and are definitely unequal), Skeeter has had enough.  She wants to write about what's it's like to be "The Help" and enlists the assistance of another friend's maid, Aibileen Clark (Viola Davis).  Aibileen has been raising white children and cleaning for white families her whole life.  But after her son dies, she's had enough of holding back, and agrees to help Skeeter.  They enlist the help of Minny Jackson (Octavia Spencer, who deserves whatever awards she might get, but I'm sure this movie will be ignored) a smart-ass maid who has been fired by  Hilly and can't get work anywhere, except with a crazy hillbilly woman outside of town, Celia Foote (Jessica Chastain). 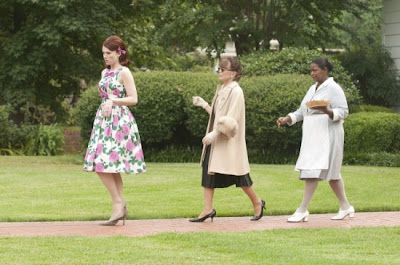 Skeeter, Aibileen, and Minny begin to record their stories.  They are aware of the total danger of what they're doing - it's illegal in Mississippi to engage in this kind of behavior, or at the very least incredibly dangerous.  This is brought home, quite literally to within a few blocks of Aibileen and Minny's homes when Medgar Evers is shot on his doorstep.  The movie focuses on both the social difficulties in what they're doing and their need to do it - to tell another side of the story.  Skeeter has never been a beauty - just ask her mother (Allison Janney) - but she's been willing to play along with the expectations of her to find a husband and be part of the Junior League and have a family.  But now she wants this too.  The novel does a better job showing how hard Skeeter has to work to get everything done and what a social pariah she becomes after she finds out what her friends are like to their maids and can't keep her thoughts to herself anymore.  However, Hilly is the President of the Junior League and a prominent member of Jackson society and the bossiest bitch you've ever met.

I don't want to spoil the major twist (but Sissy Spacek is really really funny) but know that not everything ends particularly well.  When I read the book, I kept waiting for some sort of extreme violence to happen if they got caught, and I will spoil it and say the violence you might expect, thankfully, does not come.  It doesn't end in a perfect bow, but there's definitely the triumph of the human spirit that you're hoping for by the end. 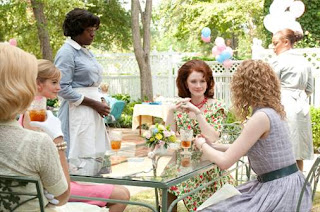 The acting throughout is spectacular.  Viola Davis is a perfect blend of joy - she really adores the babies she's raising - and beaten down.  I was nervous she wouldn't be able to play as old as the character in the book seems, but she carries the weight of the world on her shoulders and the movie shows it pretty well.  Octavia Spencer has the perfect wise-cracking attitude and knowing eyebrows to stare down just about anyone who gets in her way, though she carries the fear of helplessness around with her everywhere.  Emma Stone's role is more of the uniting character, but the movie does a better job than the book in making her character seem real.  Emma Stone is beautiful - so making Skeeter seem much less attractive than her friends is not an easy task, but they did it particularly well but showing how difficult she finds it to conform, from her insanely curly hair to keeping her mouth shut with men.  My only complaint with her performance is the dropping of her accent from time to time.  She can't be a New England/California smart-ass when her character's never left Mississippi.  But it's infrequent enough not to be distracting.  The rest of the supporting cast, particularly Allison Janney and Cicely Tyson (as the maid who raised Skeeter) are terrific.  The men in the movie are mostly superfluous, but Chris Lowell (I recognized him from "Private Practice" ) does a good job as the guy going after Skeeter.

Overall, the movie is a perfect summer movie (it's hot in Mississippi evidently) with some stand-out performances and will leave you feeling better about the world we live in today, but perhaps a bit reminded of where we come from and how far we have to go.  I thoroughly enjoyed myself.  5 of 5 stars/lambs
Posted by Jess at 6:01 PM

I think I'm the only person I know that hasn't finished the book, but the movie is on my list. Will share my review with you!

Appalling, entertaining, touching and perhaps even a bit healing, The Help is an old-fashioned grand yarn of a film, the sort we rarely get these days. Good Review! Check out mine when you can!