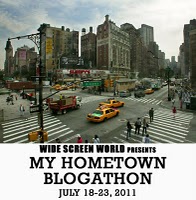 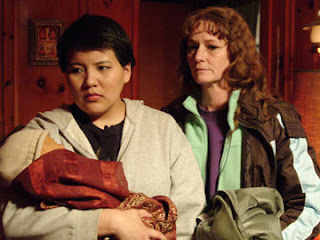 Here is the commentary I wrote at the time I saw the movie on DVD:  The movie that got Melissa Leo an Oscar nod, Frozen River, takes place less than 50 miles from my house. I look out on the St. Lawrence River daily. The movie is a perfect representation of much of the life of people who live in relative poverty in this area. "Rent-to-Own" is huge, Dollar stores are in every town and every space between towns, and a double-wide trailer really is the epitome of safety and assurance that your house will stick around. The River does freeze across for less than 6 weeks a year, and gambling and safety on the Mohawk Reservation are always a matter of concern. It's a good movie, with moving performances, but yes, it can be that dreary living the lives portrayed. 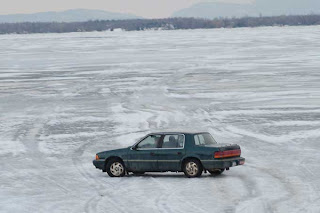 In case you haven't seen this, I'll give you a little more information about the movie itself.  Melissa Leo plays Ray Eddy, a mother of two sons who works at a Dollar store and has been saving her money to get a double-wide trailer to replace the crappy place they've been living.  However, he deadbeat gambling husband has run off with her money just in time to pay for the final delivery of the double-wide.  This makes her desperate enough (it's almost Christmas too!) to partner with Lila Littlewolf (Misty Upham), a Mohawk who lives on the nearby Reservation and is part of a group that smuggle people across the St. Lawrence from Canada to the US on the Mohawk reservation during the time it freezes all the way across and can be driven on.  Ray has a car and signs on to be a driver to make the money she needs.  As anyone could guess - the tension of driving across what might or might not be a frozen river will have you on the edge of your seat, along with the fear of being caught on the Reservation.  The desperation of nearly all involved in palpable and the discussion of the racism inherent at the borders of the three cultures involved (American, Canadian, Mohawk) while incomplete or occasionally shallow, definitely hits home.  The other issue that really resonated with me the first time I saw it was how well director Courtney Hunt captures a slice of real-life in the North Country.  I know people like these characters, I went to school with them, work with them, and read about their bigger problems in the newspapers.  Oh, and they made it into a pretty damn fine film.  Check out Frozen River.
Posted by Jess at 11:01 AM

This was such a breathtaking movie, not just for the performances, but for the premise itself. I can't begin to imagine how scary it would be to drive a car over a frozen river, and the movie, to its credit, does capture some of that feeling. Bonus points for having an under-represented minority group of people and offering a glimpse into their lives.

I love this film. Such a fantastic portrait of a very small and personal story. So even if you don't have tons of movies being made where you live, the one you have is a fantastic one.

Rich - I think it does capture a lot of the feeling of living on the edge - in every sense of the word, edge of the River, edge of society, etc.

James - it's definitely a good one.

Can I just copy yours?

Keith - definitely! It takes place closer to me, but was filmed MUCH closer to you. We can split the difference.

This was a terrific movie. It really stuck with me, especially as I'd spent time visiting in the North Country for the last three decades.

I haven't seen this one. I didn't realize she had to drive across the frozen river, that's get my interest. I'll have to check this one out. Great review.