There's not a lot to say about either because both benefit from only knowing what the trailers showed you.    So there won't be any spoilers. 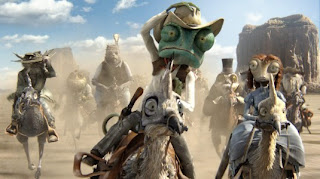 Rango is the story of a terrarium chameleon who has to survive for himself and wanders into a town called Dirt that is experiencing a water shortage.  He gets deputized to keep the peace, and of course wanders into the corruption going on, but wants to rise above it and do something important.  They add all of the elements you'd expect with a chameleon in the desert - escaping bit predators, the sun, heat, water, etc.  But what makes this movie something more than just another kids animated feature comes in 2 ways.  First, the animation is a jump above.  The detail in all the scales and whiskers and whatnot on all the desert creatures bests anything that's come before.  And second, the story is more complex than necessary for just a children's movie - it approaches many of the old westerns without going into cliche.  The dialogue is sharp with Johnny Depp's standard delivery reigned in a bit.  My only problem with it was the strange use of props.  In an early scene Depp is escaping an eagle by hiding in a standard glass bottle.  Then later, each of the desert creatures carries a bottle or can or vase perfectly scaled to their own body size.  It left an odd feeling for me - it would have been one thing if all the items they use are really "human" sized things OR the creatures are considered human size and their possessions equivalent.  Just  bothered me. Overall, a really good movie that can only be appreciated with multiple viewings.  4 of 5 stars/lambs 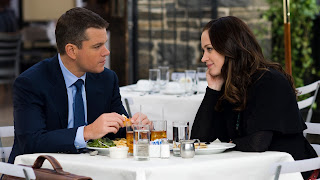 The Adjustment Bureau also felt a bit like a throwback to an older version of cinema (and maybe it was just the fedoras - Fletch said the Adjustment Bureau guys should team up or face off against the bowler hat guys from The Thomas Crowne Affair and I finally got the joke seeing the whole movie!).  The movie starts us with David Norris (Matt Damon) screwing up his first NY Senate bid, and conceding the election.  He meets straight talking Elise (Emily Blunt) in the bathroom before the speech and he realizes he's become a little different than the man he intended to be.  There are also these guys in fedoras following them around, 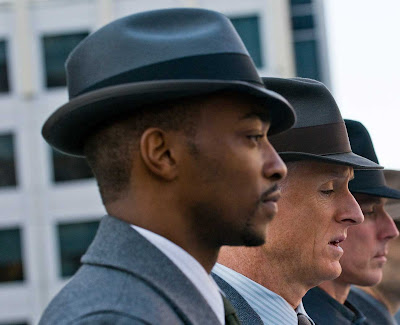 Anthony Mackie (from The Hurt Locker) and John Slattery (from Mad Men) seems to know something about what's going on.  And from the trailer we know they having something to do with controlling people's destinies.  And, it is NOT David and Elise's destiny to be together - though they have other plans.  The movie explores whether we have free will and our life is made up of only an accumulation of our choices or if there's a predestined plan that you cannot escape from.  The Adjustment Bureau makes sure to keep you on their boss's plan.  It's a terrific love story, with a really well paced plot and doesn't overdo it on the details of how the Adjustment Bureau really works.  I liked that it makes you think about your own life if there really might be a group of people attempting to get you to a particular destiny and therefore, everything you do or people you meet will help you get there.  It kind of explains why my clumsiness hasn't killed me already - I must have more of a plan ahead.  4.5 of 5 stars/lambs
Posted by Jess at 9:18 PM

I'm the Mad Hatter and I approve of this message.

Both of these sound great. I've been taken with pictures of Rango everywhere. He looks so cute.

I still need to see Rango. You seemed to have liked Adjustment Bureau just a nudge more than me, but I do agree with everything you said about it.

Buttercup - I think you'll like it, but beware, it's not as cute and funny in person. But it's a great movie.

Nick - I think the movie is settling a little lower than its initial reaction, but I honestly can't wait to see it again.

I quite liked it. I admit I had some problems with the formula, but there were enough moments where it got surreal enough (the walking cacti, for example) that it kept it interesting. Good review check out mine when you can!