This week we got into the career of Keira Knightly. Not long, but lots to talk about. As usual, the movies I saw for the first time this week in preparation are reviewed below. I'd like to thank Mia Thuro for being such a fun guest host (not sure her scenes made the final cut, but she cracked me up!). If you have comments, questions, etc. please e-mail us at reelinsight at gmail [dot] com 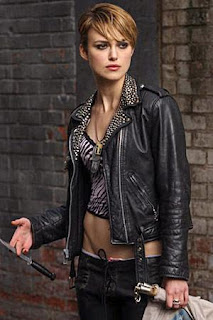 Domino - This is the crazy story of Domino Harvey, a real-life female bounty hunter who raised hell, lived on the edge of a legal life, and died young.  Knightly plays her, with Mickey Rourke as her mentor bounty hunter.  He looks the best he has in a while - he looks a lot like he did in Sin City.  The first 40 minutes of this 128 minute romp is actually interesting - how she became a bounty hunter, what it means, the trouble she ultimately gets in (the movie is told with narration to an FBI agent through flashbacks).  However, after the main heist they get involved in on both the right and wrong side of the law goes totally awry the movie falls way off the rails.  When a movie does flashbacks, the whole thing has to link up in some way to the current frame.  And this doesn't quite make it there.  A good first 40 minutes almost makes up for a terrible finish, but not quite.  2 of 5 stars/lambs


Pure - This is a very sad story of a group of kids trying to survive their junkie parents in down and out circumstances in London.  A little boy, Paul, is trying to help his mom get off coke, after her best friend dies.  Of course her dealer comes and gets her high again so he runs off to try to find help, and finds Keira Knightly as a knocked up, teenage waitress who is at least willing to feed him.  It's basically just a sad movie, but Knightly is pretty good trying to be friends with this boy, while pretending her life will be okay even though they'll probably take this baby away too.  There were quite a few recognizable British actors making up the cast (her dealer, David Wenham, is the evil rancher in Australia, the cop trying to take him down is the dad in Billy Elliot).  Depressing, but a good movie, 3.5 of 5 stars/lambs
Posted by Jess at 9:34 PM

Nice podcast! Totally agree that the Pirates of the Caribbean sequels were terrible!!! Never really been much of a fan of Keira Knightley but I'm not a hater either, she is usually fairly competent but there is obviously more talented actresses out there.

You were kinder to Domino than I was. I think it's one of the few 1/5 I've ever given. I may have liked the beginning where she the badass Beverly Hills girl, but that was about it.