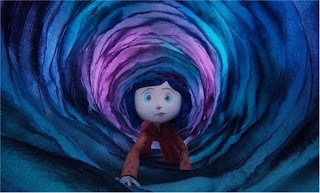 I rented 2 DVDs recently that I couldn't finish. Usually, even if a movie is incredibly boring I'll at least skip ahead to the end and actually find out what happens. Then I probably won't even bother to review it, though perhaps as part of a DVD Roundup. I saw Coraline, the animated movie nominated for Best Animated Picture this year, but it was the type of animation that I just couldn't watch. I believe it's called stop motion animation, similar to The Nightmare Before Christmas or Corpse Bride, both of which I enjoyed somewhat. But, Coraline just started to be too creepy to be believable as a children's movie and odd to be for adults. The basic premise is that Coraline finds a secret door in her house that leads to a world where her parents are the opposite of her real-life parents. I'm sure things go horribly wrong and she realizes her real parents are the best, but I don't know as I only watched about 20 minutes and didn't bother skipping to the end. I remember this being released in 3D, which I think would only be creepier, but that's just me.

The other movie I wanted to like, or at least sit all the way through, was the remake of Fame. I should have known from the moment it was listed as a PG movie that it would be nothing like the gritty, musical version from the 1980s that I secretly loved. I was roped in my a good adult cast (for musicals) - Bebe Neuwirth, Megan Mullally, Kelsey Grammer, and Debbie Allen. However, they're all underused, and kids I've never heard of did very pale, washed out versions of what the movie used to be. Not even a good "High School Musical" version, just bland. I fastforwarded to the end to hear them sing the theme song, but didn't watch the last hour.

Did anyone particularly like either of these movies, such that I should give them another chance when they appear on TV? Please let me know if I've missed something great. Or cheer me on for saving hours of my life. Enjoy watching the Oscars on Sunday!
Posted by Jess at 8:00 PM

I saw Coraline in 3D with my sis and remember thinking the same thing. It just didn't work for me at all. I can't believe it's nominated for an Oscar.

But you should have known what you were getting into with Fame. Tsk tsk.

DEFINITELY give Coraline another chance! It's wonderful. The reason it doesn't feel quite like a kids' movie is that it's not, entirely; Neil Gaiman, who writes primarily surreal adult fantasy, wrote the book it's based on. There are elements that are incredibly creative, funny, charming and gorgeous throughout - if you only saw 20 minutes you didn't get into the fully magical scenes. Give it another shot! I promise!

I saw Coraline in the theaters, but thought it was depressing and walked out of it feeling so unhappy. I say skip it.

I didn't care much for Coraline. I don't get the hype surrounding it. It looked amazing, but the story doesn't come across very well.

We rented the original Fame when this was in theaters and decided there was no way this PG thing would live up to the original. And sadly, the original didn't live up to our memories of it. It was a poorly structured story that didn't know when to stop in some instances and stopped too soon in others. Still, it sounds like a masterpiece compared to the remake.