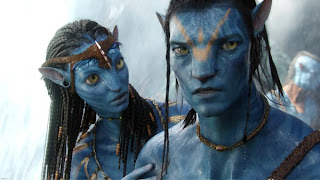 This is a very upfront movie, so I'll be upfront, I LOVED Avatar. I have to say the marketing of Avatar didn't do much to explain what the heck the movie is about - all I really understood was that it had blue people and flying dinosaur-like creatures, and from interviews on TV I knew that Sigourney Weaver and Sam Worthington were in it. But that's about all I understood. I saw the 3D version, which is spectacular, but just given the amazing visuals, I bet the 2D version is just as beautiful and entrancing. Here's a little explanation of what it's actually about: Marine Worthington arrives at a planet called Pandora (around the year 2150) where he's replacing his brother as the operator of an avatar (a Mii for the Wii crowd, or basically a physical representation of yourself that operates under your control but separate from your body) to integrate himself into the indigenous people so he can 1) learn more about them for Weaver's scientist, and 2) persuade them to abandon their homes so a company can extract a valuable ore from beneath it. Because he's replacing his brother, Worthington has no experience with either the language or customs of Pandora or the Navi (the tall blue people with tails). This works to his advantage and he begins to learn about them. He's pulled between his military commanders and the science and sociology people trying to learn as much as they can. He meets Neytiri (voiced and acted thanks to James Cameron's amazing new techniques of motion capture by Zoe Saldana) the daughter of the chief of the local Navi clan, and ultimately, his instructor in what it means to be Navi. He goes through the rites and rituals of becoming a Navi, riding an indigenous horse, flying on a raptor-type animal, and understanding the Navi's deep connection with their planet. Ultimately a huge fight goes down between the company and Navi (and you can guess what happens).

James Cameron has truly changed the art of movie-making in many ways. The ability to actually capture an actor's performance and then morph that performance into a different species with different shapes and environments is amazing. The sci-fi genre may never be the same (or many others either, given the imagination of Hollywood). However, he's still James Cameron, and wrote the movie too, so the inspiration of other movies in the past kept hitting me. The one that keeps sticking is that Avatar is what might have happened if Dances with Wolves had ended differently. However, the movie-making skill and futuristic (rather than historic) story gave Cameron the chance to tell a story without stooping to basic cliches. He only spends moments (in a very long 160 minute movie) describing how avatars work, or Worthington learning the language, or basic information about the Navi. But the collective whole of the movie gives you all the information you need to understand a beautiful story. Much of the back story is told through voice-overs from Worthington's video diaries. I went in knowing how long the movie would be, so I was conscious of when trimming might have been done, and honestly there were few moments even a couple of seconds could be cut, and definitely never an entire scene. 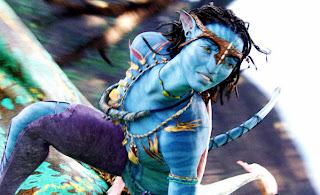 The acting throughout was superb. Weaver is excellent at playing a ball-busting scientist, pissed off at the conditions she's constantly fighting to get the best possible science done. The incursions the military has had with the Navi stopped her school (an easy explanation for why some Navi can speak English) and she's constantly fighting to get better things done. Her fascination with Pandora is infectious. Zoe Saldana (pictured above, left) as the only main character who is NEVER shown as human (most of the others appear in their avatars as well as human) is terrific. She's funny, tough, smart, and tries very hard to help her people work with the humans again even though it hasn't gone well in the past. And finally Sam Worthington is terrific. For a newcomer he carries the whole movie really well. I'm guessing he'll have trouble getting recognized for it since he spends at least half the movie as a giant blue man, rather than himself. His struggles with learning about the Navi and triumphs when he masters new skills are powerful to watch, while never stooping to over the top acting option. I really really liked Avatar as did the people I went with, so I give it 5 of 5 stars/lambs.

Sam Worthington seems to be the next rising star. With starring roles in the last Terminator film, Avatar, and the upcoming Clash of the Titans remake, I'm looking forward to where his career might take him.

Avatar is indeed a feast for the eyes and soul, and while it's plot is more basic and unoriginal than some of the other best picture contenders for this year (I think it's to be expected when you spend $300 million on a movie that it's capable of appealing to a larger audience to make that back), as a whole, Avatar is a refreshing blockbuster. James Cameron seems to be one of the few directors who can shoot a CGI battle without dizzying or confusing the viewer(I'm looking at you Michael Bay).

I was really on the fence with this, but you may have swayed me into the I think I need to see this category. Have a wonderful new year's.

Wow, you liked it a lot more than I did, but our reviews really do say almost exactly the same thing! Eerie.

David, thanks for your comments! I think you put it really well, he thought a lot about the people who would be watching it and wanted a general appeal type movie.

Buttercup, I think you'd like it best in 2D, unless imax is available, then it would be awesome.