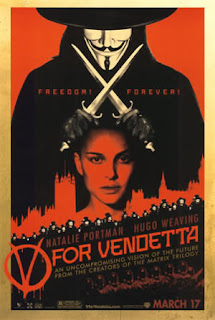 "Remember, Remember the 5th of November, the gun-powder treason and plot. I know of no reason why the gun-powder treason should ever be forgot." Those are the opening lines of V for Vendetta, a post-apocalyptic story of how fear can drive a society to relinquish rights for security, and of course, as the saying goes, get neither. However, a vigilante called V appears on November 5th promising that in one year, he will blow up the buildings of Parliament (like Guy Fawkes hoped to do). As the year goes by he also murders several members of the ruling party for reasons that aren't revealed until the end. However, on that first night V crosses paths with Evey (Natalie Portman), a TV producer, and she becomes a somewhat willing participant, embroiled in his struggle to bring down the government. There is a police Inspector Finch (Stephen Rea) who is unraveling V's reasons for the murders and what could be behind his vendetta against the government. Finch discovers that the fear of disease and the need for quarantine and thus the strict regulations and controls by the government were in fact created by the government itself to give itself complete power. Overall, the society rallies together to fight what it begins to understand is not a benevolent governing body, and Guy Fawkes ideas are achieved.

The movie is based on a graphic novel, and thus contains quite a few scenes set up with a comic book in mind - larger than life leaders on huge screens, cartoonish costuming, and extremes in language, dialogue. People are either good or bad, black or white actions, very little middle ground. However, I don't think that's bad. It's an interesting look at what you'd do about terrorists (or vigilantes) in such a restrictive society, and how perhaps it's important to examine why such a society would spawn someone willing to risk everything to take it down. I like this movie a lot, the dialogue is creative, plays on words, examining the meaning of power, etc. The acting, particularly by Hugo Weaving as V is spectacular. He has to get across a complete character while wearing a creepy mask and wig the whole time. It's all in his voice. Natalie Portman does a good job being transformed by V and holding her personal need above the fight for national change. I recommend watching it every November!

PS - This post is part of a general Guy Fawkes Day celebration to be shown on the 5ht over at Matte Havoc. Don't forget to check it out, particularly if you like V for Vendetta.
Posted by Jess at 9:24 AM

It's been a long time since I've seen this movie. I read somewhere that the movie was much more politically charged (as in a more direct critique of the Bush administration) than the graphic novel ever intended.

I agree about the black and white-ization of the characters, although there seems to be some middleground in any kind of 'terrorist' act for the greater good.