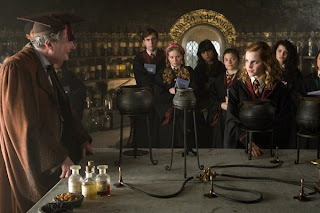 I'll admit I was a little nervous when I saw that the sixth installment of Harry Potter and the Half-Blood Prince was rated PG, that it was too dark a book to merit that rating, but the movie was still thrilling and told the story it was meant to tell. While I wouldn't take a young child, it's not beyond most kids, though they'd better not mind jumping in their seat a bit. The audience was completely mixed in my theater (with a large contingent of Russian exchange students from the local college on a movie night), with kids and adults. The kids laughed at the obvious humor throughout, which there was, even for a dark book. It left out some of the depth of the characters, but still continued their growth from the previous movie to move toward the last. The explanations of Lord Voldemort's childhood were brief and left out the fact that the book always called him charming and cajoling rather than sinister. However, I watched the entire movie and was enthralled. I never looked at my watch, and even knowing how the story should progress, found myself swept up by their storytelling and acting instead of constantly noticing the deviations or omissions from the book. Daniel Radcliff and Rupert Grint have become terrific actors and their scenes alone or with any of the wonderful cast of British actors were always captivating. Emma Watson* does well when she's serious or outraged, but her ability to laugh continues to be awkward and fake. Jim Broadbent was a terrific addition as Prof. Slughorn, and Alan Rickman's nuanced performance as Snape gives hints towards the ultimate revelations about his character and motivation. I loved the movie and can't wait for the next ones. 5 of 5 lambs/stars based on pure enjoyability and the continued exceptional quality brought to the series.
Posted by Jess at 5:49 PM

Emma Watson, not Emma Thompson :P . Though she is getting better (even her laughing). I felt it was more natural in this film than in the last... even though, according to the director, the laughing scene in the last was natural (a blooper that he decided to keep in the film).

Haha, I was wondering what the asterisk was about.

This one didn't do it for me like Order of the Phoenix. Call me a hypocrite, but there just wasn't enough action to keep me engaged. Some might cry "but the character development!," while I would counter that there wasn't much of anything there (outside of Draco's great storyline) that we weren't already wildly aware of.

Fits in somewhere between Goblet of Fire and Chamber of Secrets.