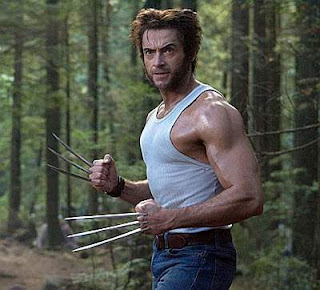 Now I've read a lot of the reviews of X-Men Origins: Wolverine that said the movie wasn't particularly good, but I disagree. It was full of action, interesting back story filling in the history of how Wolverine became who we met in the original trilogy. It wasn't a particularly complicated story, Jimmy (whose name becomes Logan, though I missed the connection) runs off with his brother Victor (Liev Schriber who becomes Sabretooth) and they fight all the American wars, since the Civil War, eventually becoming special ops searching for something in the Congo, while killing basically everyone they come in contact with. The team is composed of other mutants (including Dominic Monaghan who can communicate with his mind, lighting light bulbs, moving elevators; Will.I.Am can teleport and wears a cowboy hat; Ryan Reynolds can fight with swords really fast; and then Wolverine and Sabretooth). Wolverine decides he's had enough killing and walks away. He ends up working for a logging company in Canada, living with Kayla who seems to understand why he's a little crazy and can make bones come out of his hands. The head of the army team, Striker, comes looking for him to warn him that members of their team have been dying. Wolverine knows Sabretooth has shown up, and realizes Kayla's in danger. Wolverine finds her dead in the woods and vows to revenge her by killing his brother. However, Sabretooth is stronger and more vicious than he is, so when Striker gives him the option to have adamantium bonded to his bones (we knew this happened from the previous movies, but now we know why). While the procedure is going on, Wolverine hears Striker talking about an island and other mutants including Sabretooth. Wolverine knows he's been betrayed and adds Striker to his list of people to kill (which we know he doesn't, again, it's a prequel). In order to find the "island" Wolverine seeks out Will.I.Am (who I really liked, he was funny, but subtle instead of scene stealing) who send him to Gambit (Taylor Kitsch - Riggins from Friday Night Lights) a card playing mutant in New Orleans. Basically, lots of people fight, few die, but it turns out Striker's been trying to make a super-mutant warrior (Ryan Reynolds signs up to be altered) and the island is wasted. Wolverine and Sabretooth realize they're brothers but enemies, and that mutants are good people usually, but that Striker is still bad. It sort of sows the seeds of needing safety for the mutants, Charles Xavier does have a purpose. Overall, I liked the action and story. There were a few things that just annoyed me: 1. Everytime Wolverine and Sabretooth start fighting they run at each other from opposite ends of the room and leap into the air - EVERY TIME. 2. All of the mutants seemed to have multiple powers depending on what was necessary, ill-defined powers which are usually the most interesting. 3. The whole beginning sequence - was Victor just a bad kid or did bad things make him evil as Sabretooth later, just curious. Hugh Jackman is great - always keeps your attention when he's on screen. If you liked the X-men trilogy, you'll really enjoy this new one - it fills in some interesting blanks in the previous story. I nominate Storm for the next Origins story. 3/5 Lambs/stars
Posted by Jess at 11:28 AM

I actually enjoyed this one too... though you're so right about Wolverine and Sabretooth jumping at each other in midair! Too funny.

For the next Origins story, I'd love to see Mystique and/or Rogue.

That thing pissed me off as well. I counted at least three times it happened, if not more.

However, I didn't like this at all. It had all of the cliches, none of the fun and zero style. Epic fail.

Though if I was of the female or gay persuasion, perhaps a healthy dose of Jackman and Reynolds would have helped me. No dice...

Making this movie R-rated would have helped it out in so many ways... they wouldn't have had to try so hard to soften up such an inherently gory story line

I wanna see Kitty have an origin story. But only because I want to see Ellen Page back in the role again.
And yes, Storm would have an awesome origins story. I can just imagine her at a young age and discovering her powers. "Oh look I just made a tornado..woops." LOL.