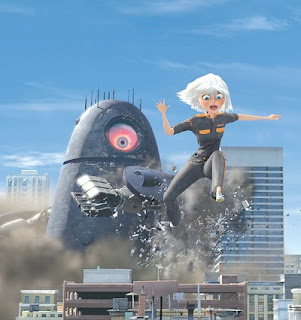 A blog friend commented that Dreamworks animation has been making the same movie over and over with Shrek, Kung Fu Panda, and now Monsters vs. Aliens. The idea that they're all about it's only what's on the inside that counts. So I started thinking about the other animation studios and what they seem to keep redoing. Pixar's theme seems to be "friends can make anything happen". From Toy Story to A Bug's Life and Nemo, even Cars, all hinge on the fact that the hero needs his or her friends to help solve the problem. Disney has had the theme of motherless (sometimes completely parentless) heros or heroines all the way from Snow White through The Lion King. So I don't think it's necessarily a bad thing if Dreamworks keeps spinning out the same theme. And I still liked the newest entry.

Monsters vs Aliens has been accurately summarized in the commercials, but there are actually lots more details in the film. Susan (Reese Witherspoon) is hit by a meteor on her wedding day and grows to be huge, renamed Ginormica by the military who have been keeping strange monsters for decades. Susan gets put in a secret military facility with the other monsters: Dr. Cockroach (a mad-scientist experiment gone wrong, Hugh Laurie), the missing link fish man (Will Arnett) and BOB (a gelatinous blob, hysterically done by Seth Rogan). Oh, and there's a huge ins 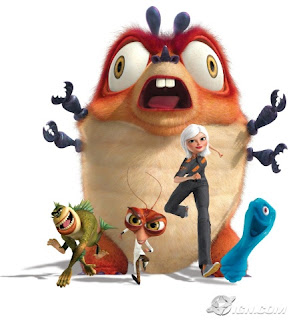 ect-like dinosaur that follows bright lights around. Susan is locked up with them. This ends Act One.

Act Two starts with the alien Gallaxhar (Rainn Wilson) who wants to get back the mineral that crashed into Susan so he can rule the world. He sends a huge robot to earth to get it back. The monsters are set free to try to battle this robot and save San Francisco. Since Monsters aren't actually bad things (and thus you must look deeper to see their inner beauty) of course they win the day, and are allowed to be freed. However, fitting into society isn't easy when you're 50 feet tall or really strange looking. So they're sent off again. End of Act Two.

The Final Act involves our heros heading to Gallaxhar's ship to destroy him before he can take over the world and destroy Susan to get his power back. I won't give it all away, but I really liked it. It was funny with small lines dropped for the adults in the audience (Dr. Cockroach invoking "Hawking's Chair" in amazement) and BOB dating Jell-O to make the kids laugh. All the kids in the audience laughed really hard and many of the adults. Overall it was a fun way to spend an afternoon. 3.5 Lambs/stars
Posted by Jess at 9:56 AM