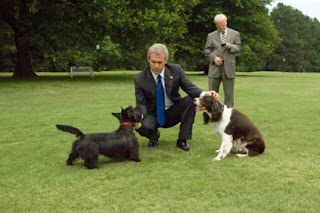 Oliver Stone's new movie W. probably won't win any awards (though a nomination for Josh Brolin wouldn't be out of place), and it probably won't change anyone's mind about our out-going President, but it did remind me that we should make a bigger fuss about who surrounds our President, who the advisers are should make almost as big a difference to the American people as the President himself. W. runs along two time periods. The first follows George W. Bush from his early days at Yale, through several jobs, drinking, meeting Laura, working for his dad's election campaign, to running a baseball team in Texas and finally becoming Governor of Texas. The second timeline follows President George W. Bush through his decisions following 9/11 and going to war in Iraq. You see all the people who advised him, most played by terrific actors who gave solid performances that emulated real people, rather than tried to map them exactly. The lone caricature was Thandie Newton's performance of Condalezza Rice, it was much more of a mockery than any of the other performances (including staunch democrat Richard Dreyfus playing VP Dick Cheney). The movie itself isn't anything like a mockery. It feels at times critical of the topic, but at others sympathetic. I don't know how much of the dialogue came from first-hand accounts or reports (since the President's day is mapped to the minute, it wouldn't be hard to verify certain meetings, but actual conversations probably not), but all the conversations map carefully to what actually happened later and who towed the line after actions were carried out. I would love to find out any argument the actual people had with the movie. The main theme carrying through the whole movie, which may be more or less true is George W. Bush's attempt to please his father and gain his respect. That was the only storyline that seems to be based on innuendo and assumption, rather than known fights or disagreements. Overall, I really liked it, both as a story told well, and a movie creatively put together. Rarely do I notice a movie's lighting scheme, but the lighting in the situation room, and in most of the White House scenes was always just a little dark and treacherous seeming, creating a mood. Ranked 4 of 5 LAMB/stars.

I just read the Mahnola Dargis review of the film in the NYTimes on October 17, and I loved this line, it does describe the overall feel of the film: "History is said to repeat itself as tragedy and farce, but here it registers as a full-blown burlesque."